This entry was posted in Interviews, Uncategorized on 28 May 2019 by Kat.

Well, Vicky (my mum) did her blog post a few months ago about what it's like to work together, so I guess I should post my version too!

Myself & mum moved to Dufftown in 2006. I was only about 8, so obviously didn't drink whisky back then, but mum didn't drink it either. We did the usual tour round a distillery, and in all honesty I thought it was gross - all I could smell was manure! Not a good first impression of whisky!

Mum joined the shop in 2006, well when I say joined, she heard Mike was short staffed one day and pretty much turned up at the shop and didn't give poor Mike a chance to come up with an excuse as to why he could say no. Not much has changed in 13 years!

I joined the shop just after my 18th birthday, February 2015 I think is the official start date for when I joined. Strangely enough, it wasn't mum who got me interested in whisky. I think it was an old employer who first gave me a try of Monkey Shoulder, and I was pretty amazed by it - it didn't smell anything like the manure stinking distillery! After a bit of badgering, Mike agreed to give me some training in the shop to see how I did and 4 years later I'm still here!

People often ask if it's weird working with family, but in all honesty I don't really notice it much. Me and mum have always been close, working together just strengthened that closeness. We've got the type of bond where we can just look at each other and know what's about to be said. I don't think we've ever had a falling out over work, and we're pretty good at managing to separate our work and home lives when it comes to being together on days off. Before having my daughter, we used to work together on Friday's in the shop. Now mum looks after my little one on the days I work so it's not often we're in the shop together. I think Mike's secretly glad of this, I don't think he coped right well when me and mum both agreed on something, especially if he didn't agree!

Working with mum as my manager (oops, sorry that should say Director, she's just been promoted!) has really helped my confidence and motivation. She's always been my biggest supporter, helping me with training, tasting notes (we've tasted a lot of whiskies together in 4 years), to encouraging me to apply for different whisky related courses and introducing me to the big names in the industry. I'm also really proud of how far she's come in the last few years too. It's not easy being in the whisky industry at the best of times, but being female can really throw it's challenges into the mix too. But mum's dealt with the (silly) people along the way who may have thought that whisky is a mans drink, or being in the industry is for men only, and she's proved them wrong each day for the last 13 years.

I don't know anyone else who works with their mum, so I can't really compare my experience against theirs, but I'd have to say it's pretty awesome working with my mum. It's like having a boss, mum and best friend rolled in to one!

The downside? Everyone who knows us says "Hi Vicky" to me when they phone the shop! 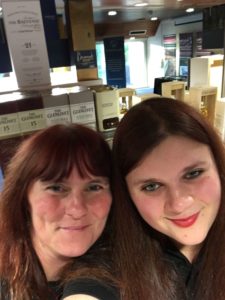 This entry was posted in Blog, Interviews on 2 April 2014 by Val Lord.

We are starting a series of interviews with people who are interesting and exciting to talk.  They will be connect to Speyside and or whisky.  We hope you enjoy them.

In this first interview our very own Vicky speaks to David MacDonald of Spey Valley Brewery.  Our thanks to The Stuart Arms in Dufftown for hosting the interview.

How long have you been brewing for and what originally got you started?

I started in 2007 when I began my MSc in Brewing & Distilling.  I was working at Glen Grant at the time and the initial course modules were predominantly about brewing beer and that got me interested.  There wasnÃ¢â‚¬â„¢t much choice in real ales in the local pubs so I didnÃ¢â‚¬â„¢t drink a lot of it until I started studying it.

What made you passionate about micro brewing?

When you work for the big brands in the industry you start to sympathise with the little guys.  I love making whisky but at my level you donÃ¢â‚¬â„¢t have much influence over the end product beyond staying Ã¢â‚¬Ëœin characterÃ¢â‚¬â„¢ for that whisky.  I love beer too and microbrewing meant I could make something from a huge range of ingredients and where I could make a difference.  It's also nice that it doesn't take 12 years to taste your work!

What do you thing has prompted the growth in micro brewing?

Beer sales are in decline generally, but craft beer and real ale is booming.  America is leading the way in showing people that you donÃ¢â‚¬â„¢t just have to drink main stream bland beer, there is more out there.  People are paying more attention to what they're eating and drinking these days and appreciate something well made locally with genuine provenance.  Ã¢â‚¬ËœLocalismÃ¢â‚¬â„¢ as a reaction to globalism and its inherent problems.

Where do you see the future of micro brewing?

I see more micro distilling coming from micro brewing and that expanding.  I also see the micros getting bigger and taking larger chunks out of the big established brands in the global beer market.

The diverse range of flavours and the personal touch.  You know the person who makes the beer, delivers the beer and you know someone you can talk to about the beer.

Which is your favourite expression of your beers and why?

Spey Stout on cask.  For me it is as close to stout perfection as I've tasted and I hit on the recipe very quickly when I started learning to brew.  I think it is well above average. [David is extremely modest]

What are your plans for your brewery over the next few years?

I hope to go to 10 barrel this year and will keep the small brewery as well as expanding but it will depend on how the public like what we do.  I also hope to open a bottling hall thatÃ¢â‚¬â„¢ll allow us to do bottle conditioned beers too.

Which of your beers would you recommend for people who havenÃ¢â‚¬â„¢t tried them before and why?

Spey Stout, whether you like dark or light beer itÃ¢â‚¬â„¢s really well balanced and not as burnt or astringent as some people expect a dark beer to be.

There is a genuine interest in Speyside as an area for connoisseur drinkers and anyone who has an interest in whisky should be paying attention to craft beer as well.  Having good breweries here shows the alco-tourists that Speyside isn't just a one trick pony!  From a manufacturing point of view, the engineering expertise that supports the whisky industry is really well established here and that knowledge and experience is transferable to brewing.

Have you plans for any new beers in the near future?

Yes, quite a few [David was being very coy here and wasn't going to let on any further details despite being plied with 19 beers] . I trialed Orbis Terrier this month and its been extremely well received.  IÃ¢â‚¬â„¢m moving over to liquid yeast in the coming month so there will be scope to try new things as thereÃ¢â‚¬â„¢s a bewildering variety of yeast strains available if youÃ¢â‚¬â„¢re set up to use them.

Do you have a preferred whisky at the moment and what do you like about it?

Cardhu.  Since joining Cardhu I have tried all the expressions and the Special Reserve, is for me, The pick of the lot [well he would have to say that].  But that Maltman Mortlach 14 Years Old you gave me was one of the nicest whiskies IÃ¢â‚¬â„¢ve tried in years! 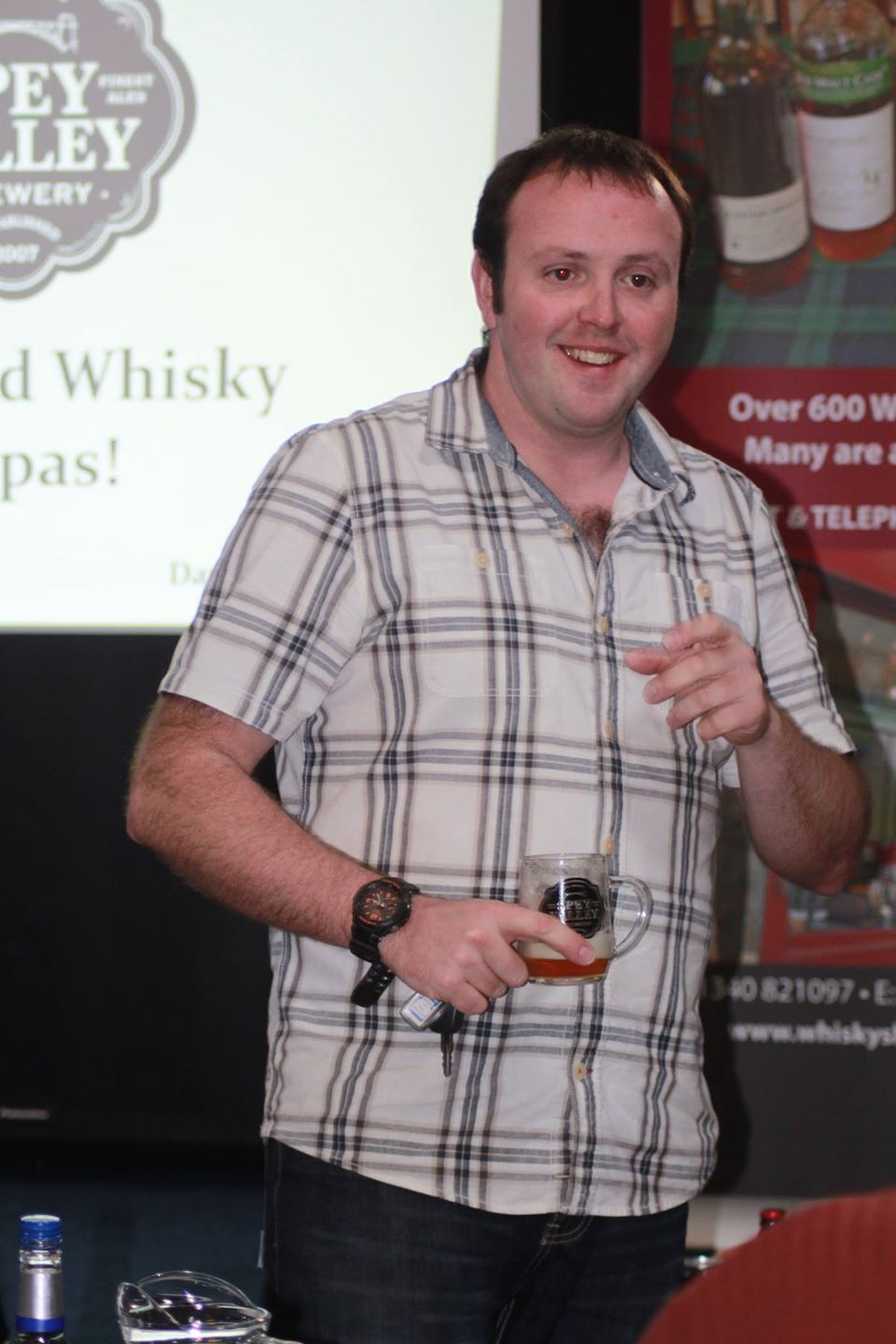 As a final comment David added: Why are you giving your money to Stella when I make perfectly good beer just around the corner [and he deserves the money much more]!

After the interview (well and truly Vickyed): 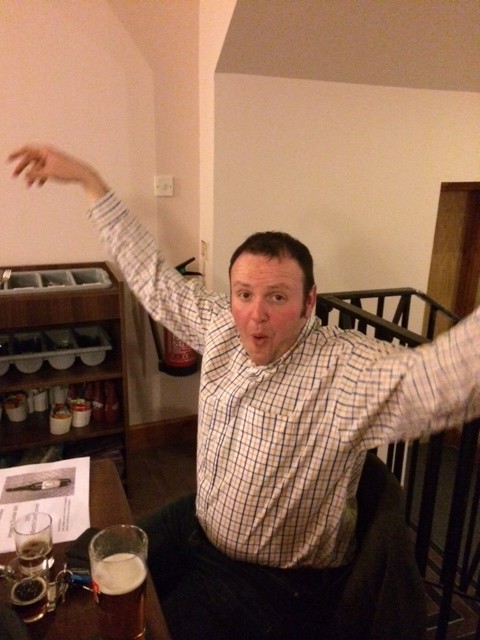