This entry was posted in Blog, Lady of the Drams on 21 January 2019 by Vicky Keough.

The Whisky Shop Dufftown is one of the very few, if not the only, whisky shop to have a mother and daughter team working together I thought it might be good to give you an insight, as a mum, as to what it’s like and how it works.

I started working for The Whisky Shop Dufftown in October 2010 and my daughter Kat joined us in February 2015 after completing a couple of months training just after her 18th birthday.

When Kat and I first moved to Dufftown in 2006 we did the obligatory distillery tour as I had never tasted whisky before. As impressed as I was, unfortunately, Kat was just as equally unimpressed thinking it smelt like cow manure. I thought this would be the end of any temptation Kat might have towards whisky. How wrong I was! Obviously, it wasn’t the end for me as I found some whiskies I liked. Then 4 years later I “inserted” myself into The Whisky Shop Dufftown and have been here ever since working my way up from shop assistant to Retail Manager. Through my new found love of whisky I kept encouraging Kat to try different ones, after she turned 18 of course. Eventually she found some she liked. Just like with me this grew into a passion for all things whisky. Eventually she decided she wanted to join the shop as well. I was of course delighted by this however, poor Mike wasn’t sure he could cope with both of us, but agreed to give it a go. Kat started as a shop assistant and has now worked her way up to Social Media Manager.

Kat and I have always had a very close relationship and are very similar in almost every way from our sense of humour to our tastes and mannerisms. This has helped us maintain a well-balanced work/life relationship where one doesn’t affect the other. I know a lot of people who say they would never work with family but if anything, it has brought Kat and I even closer together. We now also have a third generation to train up in 17 years who already loves being in the shop with mum and grandma. Not working obviously but when we pick mum up after her shift.

Like me, Kat was quite shy and quiet so it has been brilliant for me to see how Kat has blossomed since joining the team, gaining not only in experience but in confidence as well (okay those of you who know me can pick yourselves up off the floor now). Kat has been on whisky judging panels, can help anyone find their first whisky or a new whisky they’ve never had before and confidently recommend a dram you will enjoy. Not many mums get to see their daughter in action in their job so closely and I feel very proud when I watch Kat with customers and see how far she has come. I am so glad to have been and continue to be part of this journey with her. 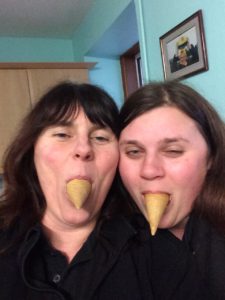 Keep an eye out for further insights.